On Edward Thomas and my Father 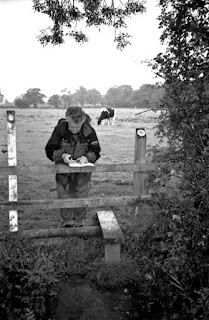 From my little green journal with the Greater Celandine Fairy on the cover, age 17.

On the poet Edward Thomas (1878-1917)
"By the English country his soul was revived when it was faint with despair, and comforted as some are by religion or music. Solitary on the bare downs, or in the sheltered valleys, on the ancient tracks above which the kestrel has always circled and hovered, and where the sheep have nibbled for such ages that the very grass and flowers have adapted their growth to evade the ceaseless menace of their teeth; or leaning over a gate to talk to the ploughman who, with such skillful ease, swings his plough at the end of the furrow; or wandering among the epitaphed tombstones of the village churchyard; or sitting by a stream reading Traherne or Chaucer, or in the evening at the inn, or anywhere the rural life of England continued inthe traditional ways- there he could throw off his melancholy brooding and be content. " -Helen Thomas

This is exactly after my heart, especially Dad's heart. It describes him exactly. The way he gets so caught up at work, is always on the phone - he gets tired and old-looking. And then he changes so, when he gets outdoors, with ideas and plans. He looks at trees, has interesting discussions - it is a total change from his work self, a miraculous transformation.