The Russian Taiga on a damp Glen Caochan Afternoon

It's a gloomy wet day in Glen Caochan. Most of the leaves have fallen except for, gratefully, those of the glorious beeches, which stay around in ambery golden brilliance until deep into winter. The dog looks at me reproachfully when I urge him out the door into the damp, dripping, darkening afternoon. It's a good day for popcorn and tea and the sound of the hoovering being done by someone that is not me.

I am sad that right now the relationship between Russia and the western nations is getting frosty again. I do love that country, despite never having been there- except that time in the middle of the night when I was asleep on a train that crossed into Russia and out again. I've been in several former USSR countries and valiantly tried to learn some of the language. One of my best friends is Russian! I've had a fascination with Russia since I was about 9 years old and watched a PBS special on the history of the Kremlin. This fascination combines will with another fascination of mine- forests. Russia has loads upon loads of forests, stretching for thousands of wild miles across the nation. Vast, lonely forests from which primeval mythical characters appear to frighten children into being good.

At university I took a class on Russian literature for fun, and of course fell in love with the great masters- Pushkin, Tolstoy, Dostoevsky. And more recently, that dear Russian friend of mine introduced me to a modern author, Boris Atkin, the author of the Sister Pelagia mystery series. He is a sublime writer. And very importantly, he has an excellent translator, Andrew Bromfield. I don't know anything about either of them except that they have contributed to much literary enjoyment on my part. I'm currently deep in Sister Pelagia and the Red Cockerel and I have found something else to love- I think Boris Atkin also likes forests, or at least is as fascinated by them:

"It didn't have a name-- just "The Forest," that was all. At first deciduous, then mixed, then almost entirely coniferous, the forest extended four hundred miles as far as the Urals Crest, crept over the mountains, and, on emerging into the wide open space beyond them, swept all the way to the Pacific Ocean across an unimaginably vast expanse of land, it's immense mass seamed with dark, broad, rivers, many of which also had no name, for how could anyone think up such a great number of names, and who was there to do it?

...On first acquaintance, the road posed as a decent country track, but by the tenth mile it had already abandoned any pretense of carrying regular traffic and shriveled to the dimensions of an ordinary forest path.

After an hour or two of rattling and shaking along a rutted surface on which black water gleamed dully through an overgrowth of spring grass, it was hard to believe that cities, broad steppes, deserts, open sky, and bright sunlight really existed in the world. Out there, and the realm of freedom, warmth reigned supreme, the meadows were full of yellow dandelions and the buzzing of bees as yet only half-awake; but in here, patches of gray snow lay in the hollows, an equal mixture of meltwater and ice pellets frothed in the ravines, and the deciduous trees still stood in their mournful winter nakedness.

When the birches and aspens were replaced by fir trees, it became even darker and more forbidding. The space closed in, the light faded, and new smells appeared in the air, setting your skin creeping and prickling. There was the scent of wild animal life lurking in the thickets, as well as a certain vague, damp terror. As night approached, the alarming scent became stronger, and that horses crowded close around the campfire, whinnying fearfully and flicking their ears." -Sister Pelagia and the Red Cockerel, chapter 3.

It actually sounds quite a lot like Mirkwood, in the Hobbit, don't you think? I'll bet Atkin relished that chapter just as much as I did, reading it over and over.  Bombur falling into the enchanted stream and into a deep sleep and having to be lugged the rest of the way, Bilbo climbing up into the sun high above the treetops and watching the Black Emperor butterflies, the white stag that comes bounding unexpectedly through the wood.

The great Eastern Forests where Glen Caochan is situated are not nearly so deep and mysterious.. much more light-filled and light-hearted. But that's okay. Any time we want some towering misty conifers, lichen-covered branches and lonely silent paths, we need only drive a few hours west to the great Eastern Mountains. 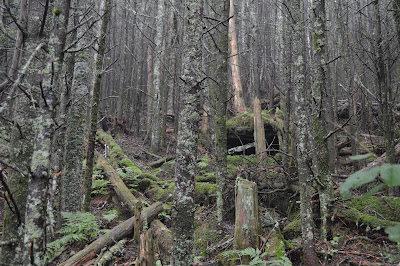 See? I found Baba Yaga's cave. And now my children are very well-behaved. ;)
Posted by Kirstie at 3:29 PM