Advent and Battle, Mourning and Celebration 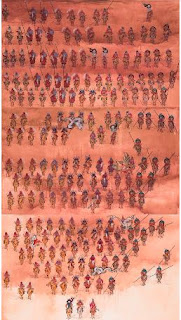 Most of us don’t know what it is like to live in a walled city in the mountains in a time of chaos, before guns and bombs, when all sorts of manual weapons and war machinery were in use. Imagine we live in a weak city, and our army is not very strong. Our walls are not thick. And we begin to hear rumors of a horde. A cruel, merciless horde, building an empire for a monstrous tyrant. Everywhere they go, they conquer. They commit unspeakable atrocities, raping, looting, ripping open pregnant women and throwing their infants over the city walls to smash on the rocks below. Then they burn the conquered city, and whoever is left alive is led away in chains, to be slaves to these cruel masters, seemingly utterly devoid of any humanity.

We cower in fear. We know there is no salvation. We are doomed, and the end will be horrible. The rumors grow until a bloody, ragged survivor staggers over the mountain path and in his last breaths, tells us that the horde is three days march away, and they are coming.

We weep and mourn as we send out our small army of terrified warriors against this horde of ten thousands, knowing we shall never see them again, and we wait, in fear, praying. For days, there is nothing but silence, terror, fasting, and mourning.

Finally, on the third day, a figure appears on the mountain ridge, running swiftly. The horns blow and the gates are opened, and in he comes. And he is not bloody, or ragged. His face is all shining and smiles and he is laughing and panting so hard he can barely get the words out: “We are saved!” In the whole city bells begin to ring and there are joyful shouts and people flooding the streets and giddy astonishment. People are hugging each other and showering gold coins and confetti off of balconies. That evening, our armies return. Every man. Exultant, victorious, singing, breaking ranks as their mothers and fathers and wives and children run to them, sobbing for joy and relief.

People flock to the city temple with sacrifices of thanksgiving. The air is full of merriment, laughing, affection, spontaneous hugs and kisses and dancing.The king opens his storehouses of food and wine and the entire city is invited to a feast of celebration. Everyone gathers in the great hall, rich and poor, lowly and important. The warriors are all given seats of honor with the king, wearing garlands on their heads.  Platter after platter of every kind of royal food appears and everyone eats their fill and the wine flows freely.

After every stomach is completely satisfied, it is time for the music. The king’s bard stands up with his harp and walks to the front of the room, tunes up his instrument, and announces that he has composed a new song worthy of the occasion.Silences falls and the bard begins to sing:

How beautiful upon the mountains

Are the feet of him who brings glad tidings

Saying to Zion, “Your God is KING!”

Hark! Your watchmen raise a cry,

Together they shout for joy

For they see, directly before their eyes,

Break out together in song,

For the LORD comforts his people,

The LORD has bared his holy arm

In the sight of all the nations;

All the ends of the earth will behold

The salvation of our God.

The bard tells the story of the battle, the doomed battle, in which all hope was lost, and our warriors stood up bravely to meet their death as the horde of cruelty advanced upon them. And suddenly in the east, as the sun rose, the blast of a war horn was heard, and all across the horizon a shimmering army appeared, hundreds of thousands strong, galloping closer and closer. The mighty horde turns to fight, and as they see what is approaching, begin to break ranks and run west, north, south, any direction they can. Our warriors yell in triumph and begin pursuit, as the great shining army joins them and together they wipe out the entire horde. Not one is left. The horde is vanquished, forever and ever, they will not rise again.

This is our story. This is the story that the oppressed Israelites waited for, longed for, to see fulfilled with their own eyes. This is the story that began as a poor, virgin teenage mother gave birth among animals, with her faithful husband next to her, cheering her on, catching the baby, cutting the cord, cleaning him and wrapping him and and putting him to his mother’s breast, laying him on straw in a manger and watching him in awe while his mother, exhausted, slept. The baby that would grow up and come to the rescue, vanquish the horde, and rule his people with justice, restoring all things, and conquer death itself, forever. Shepherds knocking and crowding in, bowing down, telling stories of skies tearing open and angels singing and sending them to find this baby, and pay him homage as king.

This is the story that is not yet finished, and as Christmas approaches we live over and over again all the aspects of this story: hopeless, depressed, fearful, trapped in darkness, we wait for the light: the prison door opening, the news of our rescue at hand. The hand pulling us out into glorious day and freedom and restoration. The waiting and watching and hoping for the return of the King to complete what He has begun, to put all things right, forever.

Already, and not yet. Already we are saved, and the work of restoration has begun, but not finished. Our souls journey toward wholeness and healing right in the midst of the darkness of the present age, hand in hand with our Shepherd, who is invisible to our physical senses, but visible to our inner self, always there, always comforting, always leading and guiding and restoring. This season of Advent and the celebration of Christmas are the living images of this story of waiting and hoping, of being rescued and healed, made whole, right in mind and body, and all the earth and peoples of the earth along with us.

May this story penetrate to the very depths of your soul this Advent and Christmas, and sustain you ever after.

The Sermon of Saint John the Baptist
Pieter Bruegel the Elder, Pieter Brueghel the Younger 1566