Ode to an Old Friend AKA Abby

Well isn't this so typical- I go for months without writing and then- two days in a row. My passionate interests and desires to do things come in spurts of intensity. I suddenly remember today how good it was writing yesterday and I want to do more. Tomorrow I might build on this momentum and write again- or, distracted by the sheet music on my desk and my viola on its stand on my dresser- decide to record some chamber music that is me playing all the parts. That is really fun. I also have winter seeds to plant and invasive vines I want to rip out while they are dormant. Books to read, a new banana recipe to bake, art ideas- let's just say that when I have free time boredom is never, ever, an issue. Three kids, husband, two dogs and two ailing parents with dementia for whom I am the medical power of attorney- you might ask what have I to do with free time? Yes, I am always behind on things and forgetting things. But I can't help it. My interests intrude and insist on luring me out of responsibilities into joyful creative places. And I wouldn't trade that for anything. I don't think I could still be sane right now otherwise. Joy is a good buffer against the hardness of life on earth.

One of the things I did in this last week while sick was watch all 16 episodes of the Korean Drama "Because This Is My First Life." As far as K-dramas go it wasn't one of my favorites. But the lead female actress, Jung So-Min, reminded me so much of a childhood friend that I've lost touch with that I haven't been able to stop thinking about her. Yes, to me, Jung So-Min looks like the Korean edition of Abby. No, if you happen to be one of my childhood-era readers that knew Abby and you go look up Jung So-Min, you probably won't see the resemblance. But after 16 hours of watching her I began to remember Abby's face and expressions vividly. Thinking about Abby goes well with my ponderings about living with ADHD because I'll venture to say that she probably had/has it too, in the much more culturally recognizable form. I flew under the radar for my whole childood and young adult life with not an ounce of an idea that my struggles fit neatly into the category of "Inattentive Type ADHD." I was quiet, Abby was not. I was very cautious, Abby was not. But aside from those two qualities I can see that we were very, very similar, which is probably why we were such good friends.

We were both very impulsive, though my impulsivity was restrained by fear and caution so it wasn't nearly as visible. She didn't seem to have those restraining factors and I often remember pulling her back by her collar from the edge of a canyon, so to speak (Abby was a metaphorical "let's try hang-gliding with this new invention I built this morning!"). I can see her high up in the limbs of the enormous old Norway maple behind by house, with me below pleading for her to come down, absolutely certain that she was on the verge of plunging to her death. I have no idea where Abby is today, but if she is anything like she was as a kid, her hobbies probably involve sky-diving, swimming with sharks, and a side of space exploration. I hope she has pursued life with the boldness and flair she used to have.

My impulsivity involved much less risk but the fun thing about having Abby for a friend was she was always up for adventure and ready to jump in head first. She was a great supporter of my ideas. Putting on disguises and foreign accents and going around our small town seeing if anyone recognized us. Deciding we were old enough to go out to a fancy restaurant by ourselves and dressing up and putting our money together and giggling and flirting with the cute waiters who were hopefully Italian but were probably just local high school boys. Writing elaborate creative stories together... which I bet I have some of stored away in a box in the attic. I can picture her handwriting precisely in my mind after all the notes we exchanged in class. I hope she is still writing, too.

I'm thankful for her perpetual encouragement of my creative, out-of-the-box self. And she was one of those people that deeply cared and was always there for you, no matter what. We had some terrible clashes, one of them involving, shall we say, her un-asked-for-assistance with a boy I liked (which I can see now came from a heart of wanting to help a friend and not thinking through the possible results, which was that I would lose my head and go crazy and not speak to her for weeks).

I really hope Abby has taken the world by the ears and shaken it. I have no idea where she is or what she is doing, but maybe somehow this blog will find its way to her. I want her to know she was one heck of a great friend and influence and that she is making me laugh right now to think about her. I'll bet she has a tome full of crazy stories from her life of the past twenty-plus years and I hope one day I'll get to hear them. 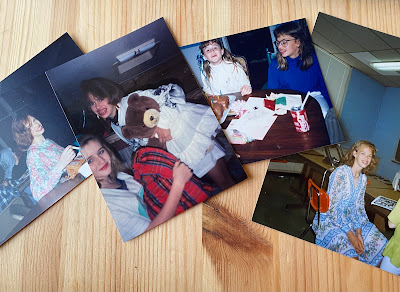